The 3-day international conference is backed by IEEE Computer & Communication Societies, Lahore Section (R10) in technical co-sponsorship and with joint collaboration with Al-Khawarizmi Institute of Computer Science (KICS). The conference is a platform for the researchers and practitioners from across the world to share their ideas and experiences related to the state-of-the-art and the future of open Source systems and technologies, software applications, databases, networks, information security, OSS and social innovation, embedded computing, cloud computing, virtualization, AI for knowledge discovery and automation, etc.

Talking to the audience, the provincial minister said that Pakistan and China’s friendship was too long and now needed to strengthen more by increasing people to people contact. He believed in long lasting relationship with China and the same he conveyed at the event. Raja Humayon also told that China had emerged a big economy and now had become a leader in world trade, thus we should take benefits from the country. He also revealed that UET had been pivotal in technology’s advancement and it will continue to be the same in future. Prof. Dr. Fazal Khalid, in his address, said that KICS always proved to be lucrative in terms of researches and bringing new innovative ideas. He appreciated the efforts of Dr. Waqar, Director KICS, for successfully conducting ICOSST for last many years. He insisted on the advancement of technology and for this also encouraged the part of KICS that had been doing great in this regard. Prof. Fazal said that universities could contribute big in strengthening the economy and UET had done so a number of times. He liked the efforts of KICS UET and SUSTECH university China and UNESCO China for launching Pakistan’s first smart classroom in UET Lahore. He said that more universities in Pakistan had to be conferred with this facility in future. Vice Chancellor UET Prof. Sarwar said that he had good relation with ICOSST since its outset. He gave the reference when he was one of the reviewers of the papers for ICOSST in 2006. It was a tremendous experience and since then he had been very actively enjoying this conference. He insisted on the need of open source and revealed its importance. VC UET said that we needed to tread along with the rapid growth of technology. Other guests too shared their experiences on open source technology and the conference. Dr. Henry, CEO Global Engagement Southern University of Science and Technology, told they had been working in more than 16 countries with the help of ministry of education China. He further said that they were out to change the world. Dr. Li Xu revealed about the progress of SUSTECH University China. Dr. Li Ming praised the conference and then told about UNESCO’s role in launching the smart classroom in Pakistan and other countries. He said that UNESOC ICHT’s sole mission was to explore the potential in ICT and IT from developing countries. He also mentioned that UET was among the best universities in the world and in Pakistan thus he liked being associated with it for the launch of smart classroom. 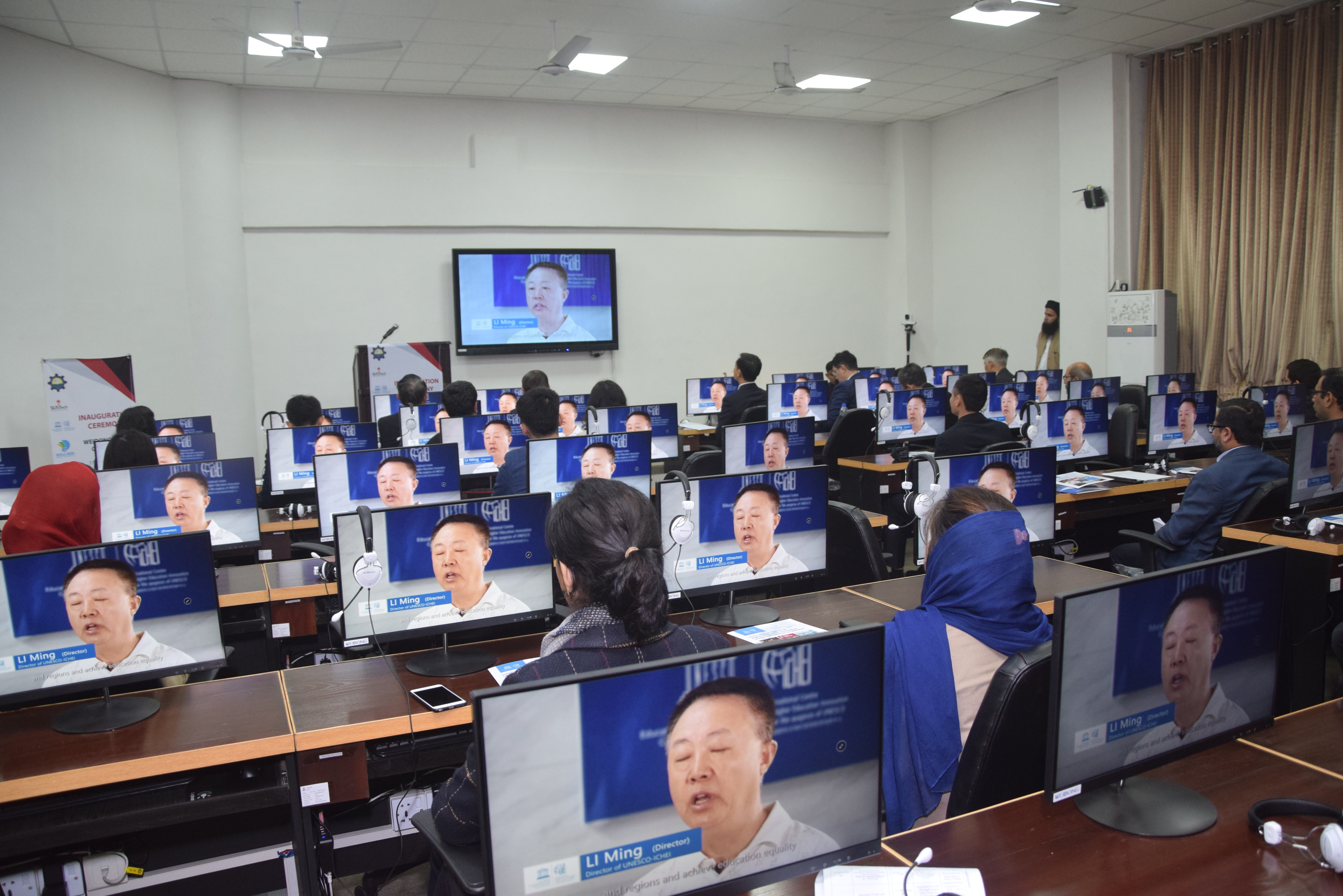 Chinese delegation also revealed that more Pakistani universities were in pipeline for setting up smart classrooms there.

Passing out students of professional training held at UET were awarded with certificates by the minister and guests. VC UET presented the souvenir to Raja Humayon and then the guests were conferred with the same by the minister. The minister along with the distinguished guests inaugurated the exhibition and smart classroom that is an initiative of leveraging ICT-driven innovations implemented by KICS, donated by Weidong Cloud Education Group, China, supported by Southern University of Science and Technology (SUSTech), China and facilitated by International Centre for Higher Education Innovation under the auspices of UNESCO (UNESCO-ICHEI), China. A presentation was given at the smart classroom by Prof. Dr. Waqar Mahmood followed by a demo of multipurpose robot designed and developed by KICS’ lab under supervision by Dr. Usman Ghani. This robot does multi works such as marks attendance, filter out the students who cheat at the examinations and other surveillance works. 83 papers (50 national and 33 international) were submitted and out of which 18 were accepted. The review committee consisting of experts later finalized 11 quality papers (6 international and 5 national) to be presented at the conference. Review committee consisted of 174 members from around the world who very carefully chose the best quality papers.

‘The Best Paper Award’ has also been arranged this time and it will be conferred to the authors whose paper(s) will be selected by the technical committee among the papers presented in ICOSST 2019. The paper will be evaluated based on relevance to the symposium’s scope, its scientific contribution, writing and author presentation. The technical committee will send its recommendations to the ICOSST steering committee that will finalize the ‘Best Paper Award’. The evaluation criteria of the award will be based on technical merit, originality, potential impact on the field, clarity of the written paper, and quality of the conference presentation. Both international and local speakers delivered their technical talks apart from the paper presentations. Idea Competition for startups was launched this time in this 13 th IEEE International Conference on Open Source and System Technologies. Final round of this competition will be done on 18 th December at the conference. Selected and winners of this competition will be awarded with various prizes and distinctions. Closing ceremony will take place on 18 th December where Director KICS Prof. Dr. Waqar Mahmood will be the guests of honor. Other guests will include Li Zhang from Guangdong University of Petrochemical Technology (China), Prof. Dr. Georgios from Sus- Tech (China), Irfan Mahmood from University of Bradford (UK) and Dr. Aashiq Anjum from University of Derby (UK).